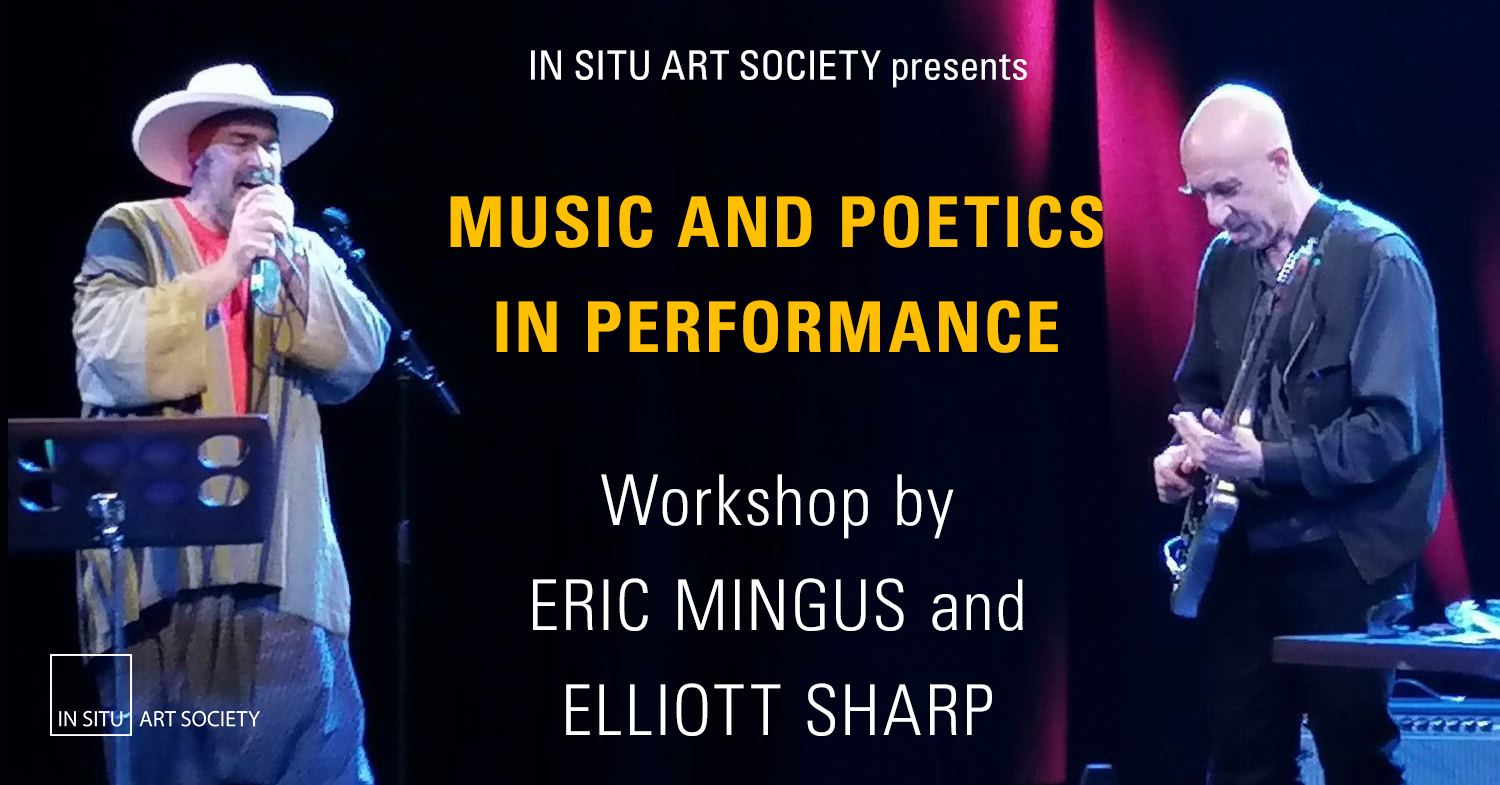 Longtime collaborators Eric Mingus and Elliott Sharp have worked together for decades in a dizzying variety of musical situations: opera, blues, improvisation, funk, children’s choirs – plus their distinctive duo project “Fourth Blood Moon”. They have developed a variety of strategies for melding poetic texts and lyrics to music both concrete and abstract.

In this 4-hour workshop, Mingus and Sharp present a variety of ways to consider how to meld poetics and sound: whether in songs, opera, improvisation, or sound installation. The two will discuss their own experiences in these various realms and lead the group in a series of playful exercises that draw upon their past and future projects and expand the possibilities for the participants own future work.

Eric Mingus is a bit of a polymath when it comes to his music. Trained classically as a vocalist, he sings the blues like nobody’s business, improvises with the best of them, and plays a fierce bass. Creates worlds with his words whether he speaks or sings. When famed producer Hal Willner needs that special moment in his multi artist shows, he calls Eric. Hubert Sumlin loved the way Eric brought “soul” to the blues. When Elliott Sharp wanted a vocalist for his project Terraplane, he knew Eric was the right voice to bring the contemporary blues to his musical vision. Eric has a unique sensibility when bringing music to film, and has scored two documentaries on boxing for ESPN. His passion to write and perform poetry was encouraged by the likes of Allen Ginsberg, Jack Micheline and Lou Reed. One of Eric’s most recent successes is the creation of his unique take on the Who’s “Tommy”. Working with Hal Willner, Eric brought a brilliant reworking of a rock classic to the Adelaide Arts Festival (2015).

Composer and multi-instrumentalist Elliott Sharp is also a producer, sound-designer, author, and visual artist who leads the projects Orchestra Carbon, SysOrk, Tectonics and Terraplane and whose compositional strategies encompass fractal geometry, chaos theory, algorithmic approaches, genetic metaphors, and new techniques for graphic notation. He has been awarded the Berlin Prize, a Guggenheim Fellowship, and fellowships from the Foundation for Contemporary Art and the Center for Transformative Media. Sharp is the subject of the documentary “Doing The Don’t” and has been featured on NPR’s “All Things Considered”. His composition “Storm of the Eye”, for violinist Hilary Hahn, appeared on her Grammy-winning album “In 27 Pieces”. Sharp’s collaborators have included Qawwali singer Nusrat Fateh Ali Khan, pianist Cecil Taylor, Ensemble Modern, pop singer Debbie Harry, JACK and Arditti string quartets, blues legends Hubert Sumlin and Pops Staples, jazz greats Jack Dejohnette and Sonny Sharrock, media artists Christian Marclay and Pierre Huyghe, the Radio-Sinfonie Frankfurt, and Bachir Attar of the Master Musicians Of Jajouka.